Turtle Mound also known as the Paul B. Follansbee Rockery is a stone cairn found in Andover overlooking Haggetts Pond in West Andover. It is named Turtle Mound because an arial view resembles a turtle. The actual date of the structure is not known, although it is thought to have been constructed by Native Americans.

The boulders that make up the structure may vary in size from pebbles to 3 tons. On the outside the dimensions of the Turtle Mound measure approximately 70 feet by 30 feet by 15 feet; on the inside there are two cave-like chambers, eight feet in diameter and 10 feet high, and a rock-lined tunnel.

In a 1951 study of the structure, Yale archeologist Frank Glynn found a layer of human bones mixed with charcoal indicating the structure was used for ceremonial and cremation purposes. Radiocarbon dating of the charcoal sets the date at 2000 B.C. He also found spear points, axe heads, hammer stones, and drills. These he dates at 3000 B.C.

One of the owners of the property, a M. Harnois, built a shrine to a saint on the site in 1914. Evidence of Harnois' shrine still exists.

In 2015, A.V.I.S., a non-profit land trust based in Andover, acquired the site. Subsequently A.V.I.S. comissioned historian and author James Gage to conduct a research study on the site. The research report, A History of the Paul B. Follansbee Rockery, is listed below. 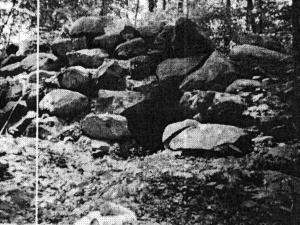 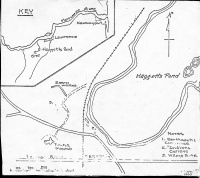 Turtle Mound is a pile of boulders stacked together with dimensions of approximately 70 ft, 30 ft, and 15 ft.