In 1833, Peter Smith and John Dove decided to form a company to spin flax and manufacture machinery needed for the process. They had originally met in Scotland where they worked for John Dove's father. John Smith went into business with them and eventually the company ceased making machinery. They bought water power and buildings from Abel and Pascal Abbot in Abbot Village in 1843. In 1864, John and Peter Smith and John Dove incorporated as the Smith & Dove Company. New mill buildings were added in 1994 and by 1896 they employed 300 people. In addition to the jobs the company provided housing and recreational facilities for employees.

In 1927 the Smith & Dove Company was sold to Ludlow Manufacturing which moved the manufacturing plant and the mill was closed in 1928.

In 1970's two additional buildings were added to the complex and the the Smith & Dove complex was turned into the Dundee Park office complex. 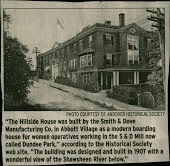