In 1820, Abraham Marland purchased a paper mill and converted it to produce wool. In 1879, it was bought by the Stevens Woolen Company. The original mill buildings were replaced over time, and the mill operated until 1960.

The DASA Corporation bought the building at North Main and Stevens in 1964.

In 1984 The Dorman Bogdonoff Corporation, a large private manufacturer of membrane and tactile keyboards, renovated the Marland Mills complex on Sevens Street to house its manufacturing and administrative operations.

In 1996, one of the remaining buildings was converted to an assisted living facility called Marland Place. 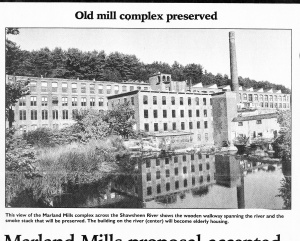