The Andover Consumer ‘s Cooperative (the Co-op)was founded in April 1938 by 3 young men, Russell Dimery, George Kimball , and Arthur McLean, with the encouragement of Reverend Cornelis Heijn of the North Andover Unitarian Church. It followed the example of the first co-op store in Rochdale England with one vote per person, sales at prevailing market prices, refunds from earnings based on purchases, and open membership based on purchase of stock ( $5.00 per share in the new Co-op). The Co-op was first housed in the Kimball/McLean apartment in North Andover. By October 1948 they had moved to North Main Street in Andover and acquired 25 members and a hired manager. In 1939 when they incorporated they had 53 members and weekly sales of $185. Members helped by doing work in the Co-op. In 1941 the Co-op moved to their final location on 68 Main Street in Andover. In 1948 they bought the building, and enlarged it in 1954 and 1960. They joined with other cooperatives to build a wholesale warehouse. Business boomed; in the late 60’s sales approached 10 million with over 3000 members. Then sales dropped and expenses multiplied. In 1974 the Co-op had an operating loss of $80,500 and needed $150,000 in equity. 30,000 more shares would have had to be sold to raise this amount. In 1974 there was an upsurge in stock purchases and sales as people tried to sustain the Co-op, but it was not enough. In 1975 the board of directors sent a letter to stockholders recommending liquidation. In April 1975 it was announced that the Co-op would close before summer. In May of 1975 the Barcelos brothers bought the supermarket. When the Cooperative was liquated in 1978, stockholders received $8.25 for each $5.00 share. When Barcelos supermarket closed, CVS took over the space. 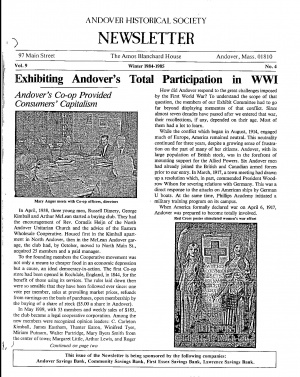 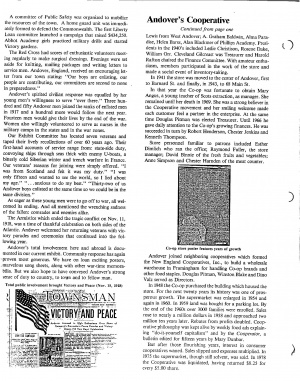 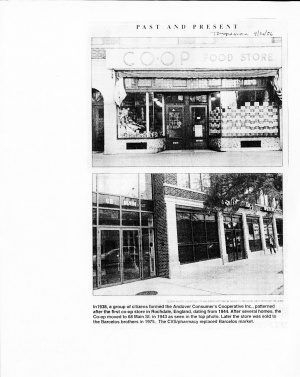