Dylan's Bar & Grill was located on Park Street in Andover. The restaurant was owned by Samuel Petrovich since 2003. It closed in November 2013. Another pub named Justin's had occupied the space before Dylan's. In the 1920's it was the site of Park Street Lunch.

In 2005, Petrovich was found in violation of Andover's alcoholic beverage laws because he did not have the correct license for serving alcohol to patrons on the restaurant's outdoor patio. The restaurant had the correct licenses before Petrovich bought it in 2003, but he failed to indicate that he would continue to serve alcohol outdoors, and the license was not renewed.

In 2009, town selectmen voted to raise parking fines from $15 to $20. As a result, Petrovich offered to pay the parking meter costs during the time that a patron came in to each lunch. He also advertised that he would gladly make change to anyone who did not have coins for the parking meters. 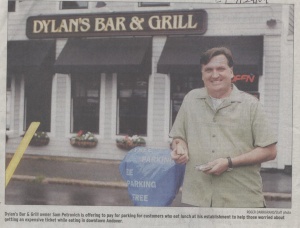 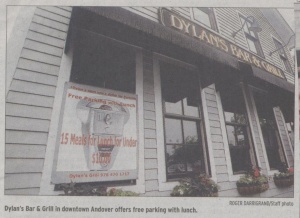