In 1856, Henry G. Tyler began to make rubber cement and overshoes called Compos in the Old Whipple File Building in Ballardvale. Two years later he moved to North Main Street. After obtaining a patent for combining zinc oxide with rubber to create a white rubber, he began to produce surgical and pharmaceutical products such as syringes and bulbs under the Tyrian trademark. Throughout its history, Tyer Rubber had a continuous history of invention and innovation.

At the turn of the century the company was one of the first to produce inflatable bladders as rubber centers for baseballs, footballs, and golf balls. By 1906, Tyer had a workforce of 500 and annual sales of a million dollars. Horace Tyer died in 1907 and in 1909 Myron H. Clark became the President of the company with Henry G. Tyer as Vice-President. In the 1920’s, Tyer stopped making tires, and began to concentrate on player piano tubes, tobacco pouches, and rubber rolls for the paper industry.

During World War II, Tyer Rubber received the Army-Navy Production Award for its rubber pontoons and reconnaissance boats, made by a new process Tyer invented called “hotcure.” By 1956, their sales were 7 million dollars per year, and they had 1100 employees. In 1961, Tyer was bought by Converse Rubber to make canvas footwear as well as hockey pucks as the sole supplier to the National Hockey League. The North Main Street buildings were razed in 1963 and 1967, replaced by public safety buildings. Shoe manufacturing ended in 1977. A group of employees bought the buildings from Converse in 1978, continuing the production of rubber rolls. A year later the buildings were sold and, in 1981, the Railroad Avenue building was converted to Andover Commons, low and moderate income and elderly housing. 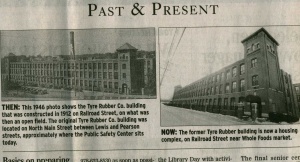