In 1899, the General Court of Massachusetts passed a law requiring that all cities and towns establish a town seal that should be managed by the respective Town Clerks. ( An Act to Establish )(For Every Seal ) Prior to that time, Andover used a plain sticker-style seal as shown below. In 1900, Andover Town Clerk Abraham Marland authorised using artwork from a town 250th anniversary banner to create a historically meaningful town seal in accordance with state law. (New Town Seal ) An photograph of the banner is shown below. A Boston Globe article noting the Town's 1896 anniversary celebration, referred to the anniversary banner artwork as a "representation of the town seal, but there is no evidence that the imagery was legally a seal for the. Town until 1900. (Andover's Days )

According to Andover native and notable local historian Bessie Goldsmith,

The land comprising both the North and South Parishes of Andover was purchased from Cutshamache, the Sagamore of Massachusetts, for six English pounds and a coat. This event is commemorated in the town seal, which was officially adoped at the annual meeting on March 5, 1900. It is generally believed that the new seal was designed by Leonard Sherman, a local artist, photographer and nature writer. However, there were no Native Americans in New England tribes that ever wore such an elaborate headdress. (The Townswomans Andover )

In 1895, John E. Whiting, a local jewler, designed a porcelin pin depicting the sale of the land that was to become Andover from the Indians as a souvenir for the Town's 250th anniversary. A photograph of one of the pins as well as the Andover Townsman ad advertising them can be seen below.

For the Town's 350th anniversary in 1992, the Town requisitioned a painting of the seal for the selectman's meeting room. Kristoffel Meulen, then a high school senior, painted the 350th rendition of the seal. A photograph of the painting can be see below.

Over time, there has been disagreement about what local organizations can use the Andover town seal. Some groups, like soccer teams (Town Seal Won't Be Seen On Team Patch ) have been turned down while others such as the Andover League of Women Voters have been allowed to use the seal. A law was passed in 1881 to prevent unauthorized use of town and city seals and badges. (An Act to Prevent Unauthorized Use). In 1976, to commemorate the country's bicentennial, the Board of Selectmen authorized the use of the Town Seal for a commemorative silver medallion. A photograph of the coins appeared on the Town Warrant and Town Finance Committee Report mailed out to Andover citizens in advance of Town Meeting year. An image of the cover appears below.

In 2017, The Boston Globe published an article describing many Boston Metro-West towns as having Native American and colonial history depicted on their seals. The article describes much of the Commonwealth seal artwork as inaccurate. (Unsealing the Past )

In 2020 or 2021, The Town of Andover establed a Town Seal Review Committee. The Committee was charged with to reviewing the existing town seal and soliciting public input in order to develop recommendations that may result in modifications to the Town Seal. In February of 2022, a Town Seal Survey was circulated online to gather feedback about Andover citizen's familiarity with the Seal, the history of the Seal and their feelings about modifying the seal. A .pdf document entitled Andover's Town Seal accompanied the survey featuring a brief. overview of the Town Seal and its history. 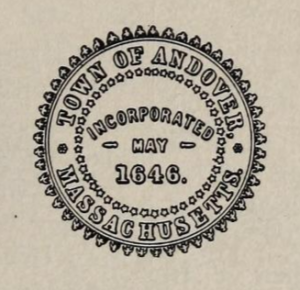 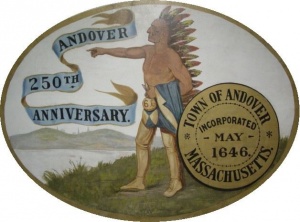 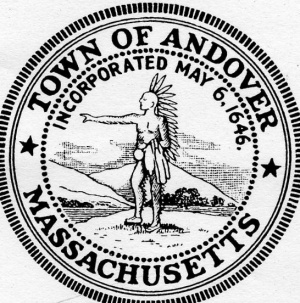 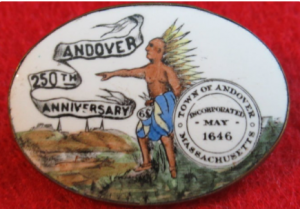 ...Souvenir Pin from a private collection 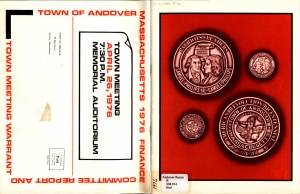 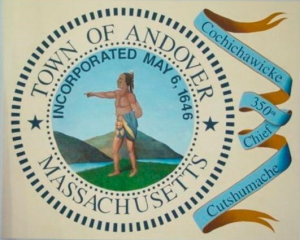