The Ballardvale area in Andover is named after Timothy Ballard who owned a salt and grist mill in the 18th century. In 1836, John Marland built a woolen mill on the site that went bankrupt in 1857. The company treasurer, J.P. Bradlee aquired the mill, named it the Bradlee Mill, but the area continued to be called Ballardvale. 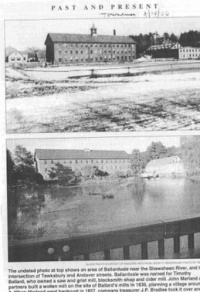