Boston King Cafe, serving breakfast all day, opened on April 26, 2008 by Andover resident Sun Son. It is located on North Main Street in the same location where Friendly's used to be until closing in 2005. The building was purchased by Butler Bank and they chose to rent out space to other local businesses, including Boston King Cafe, a law office and an orthodontic practice. 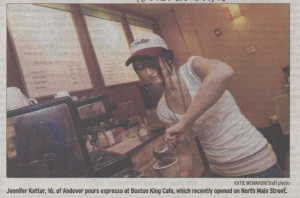