Kaps was a clothing store, primarily focused on a male clientele that had been operating for nearly 125 years in the area before it closed in March of 2009 as a result of declining sales.

The business was first opened by Elias Kapelson on Essex Street in Lawrence in 1885. In 1990, Kaps opened the location at 5 Main Street in Andover, which had been the home of Lawrence Gas and Electric. By 2009, there was a total of four locations, including Burlington, Marblehead and Wellesley. All four locations closed in 2009, citing the recession as the cause of decreased sales.

The space was occupied by another men's clothing store, Natale's, from March 2009 until December 2009.

The building was purchased since been purchased by the owners of Christina's Bridal. 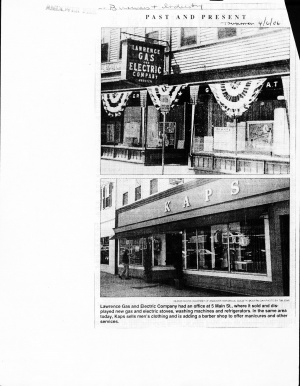